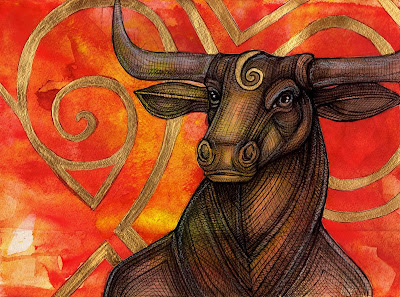 Philadelphia avant rock band The Red Masque recently completed a Kickstarter campaign to raise recording / mixing funds for their latest studio album Mythalogue. The campaign was successfully funded through the generous support of the band's fans. This new album will feature nine new studio tracks (recorded in spring 2012) as well as one live song (professionally recorded at a show in Philadelphia in 2011). The album is currently being mixed by acclaimed musician and producer Bob Drake in France.

Mythalogue will be released in two formats: a standard issue CD and special limited art edition, all presented in a custom made book-bound gatefold sleeve with a fold-out mini poster featuring artwork by TRM vocalist Lynnette Shelley. The custom art CD (edition of 50) will feature mini original artworks by Lynnette. These artworks will be presented in the format known as Artist Trading Cards (ATC), which are the size of a standard baseball card. Each card will be one-of-a-kind. The nine new tracks include both five main songs (recorded at Orion Sound Studios in Baltimore by engineer Mike Potter) as well as four "intercessionals" recorded by the individual band members: The Wendigo, The Minotaur, The Dark Salt Sea, The Song for Icarus, The Labyrinth, The Sires and the Snakes, The Blessing, The Curse and The Ruins of the Palace of Minos. The bonus live song is a professional recording of "Polyphemus", which the band played at the Fire in Philadelphia in May 2011. Previously, Polyphemus appeared on the band's last studio album, Fossil Eyes (released through ReR USA in 2008). This makes a total of ten songs on Mythalogue.

The band will be setting up some shows to promote the new album once it's released. They are interested in playing alternative venues (livng room concerts, art spaces and other non-club venues). If you would like to see about having the band perform in your area, please email theredmasque@theredmasque.com. Currently a show is in the works for August to preview the songs on the album, with some further shows being worked on for the winter that will both preview the new album as well as showcase live perfomrances of the songs on the album. Please visit http://theredmasque.com/schedule.html to keep informed of any upcoming shows.

THIS WEEKEND / NEAR FEST: For those of you attending the North East Art Rock Festival (NEAR Fest) in Bethlehem, PA this weekend, Lynnette will be in the vending rooms displaying / selling copies of some of her artwork. Please stop by and say hi. She will be bringing along the original artwork that will be included as a poster in the CD (pictured below). The above artwork of the minotaur will be on the album's cover. 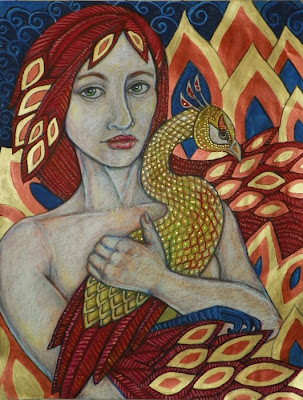