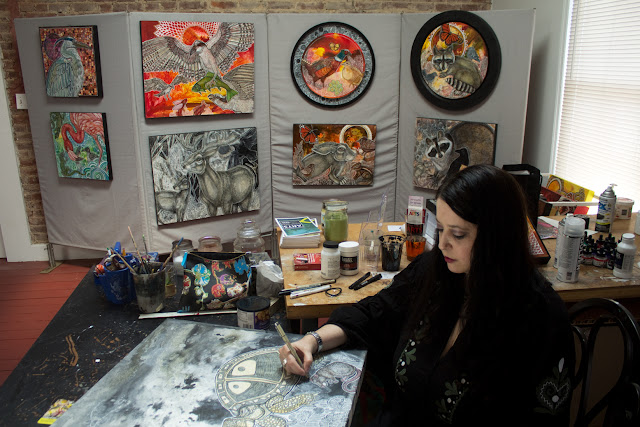 Lynnette Shelley is an award-winning Pennsylvania artist specializing in contemporary mixed media animal paintings. Having a great love of wildlife, folktales, tribal art and world mythology, Shelley fuses these influences into her strikingly unique artworks. Her paintings strike a primal chord in many viewers, with almost Jungian associations to the colors and shapes. Her highly detailed and complex compositions are created using a sophisticated process developed from a buildup of multiple layers incorporating techniques in both drawing and painting - from crosshatching to dry brushing to ink splashes and freehand drawing.

Shelley's animal and mythological-themed artworks have been displayed nationally as well as regionally at museums, art galleries and other venues.

In addition to her fine art pursuits, Shelley is also the co-founder of The Red Masque, an original dark art rock / progressive rock band she has been writing and performing in since 2001. Shelley is also the vocalist in Green Cathedral, a contemporary art rock band. They released their debut album in 2017.

Originally from Delaware, Shelley lives in Ambler, Pennsylvania, and maintains a private studio in Norristown.