I probably read Moby Dick by Herman Melville for the first time only about a year or two ago. I was playing catch up on various classic works of literature that I had never gotten around to reading but had always wanted to. The quest for the white whale seemed like a good place to start over a hot humid summer.

I had actually originally read the non-fiction book In the Heart of the Sea, which was the true accounts of the Nantucket whaler Essex, which was rammed and sunk by an enraged bull sperm whale around the year 1819 or 1820.
This actual maritime disaster (the men aboard the ship spent three months at sea adrift for the most part, and resorted to cannibalism in their dire hunger and thirst), inspired Herman Melville when he wrote the end of Moby Dick, in which the white whale rams and sinks Captain Ahab's ship.
In this artwork, I wanted to depict Moby Dick as an ancient and almost elemental figure, and to that end I decided to stylize him almost like a piece of driftwood.
The original artwork is for sale
"The Dark Salt Sea (Moby Dick)"
Unframed: $299
Matted and Framed: $399
Size: 19 x 12 inches unframed; 24 x 18 inches framed approx.
Gouache, oil pastels, colored pencils, sharpie and liquid silver leaf on Canson paper.
Email redeye@designbyredeye.com with inquiries or view more of my sales online at www.lynnetteshelley.com/originals.html 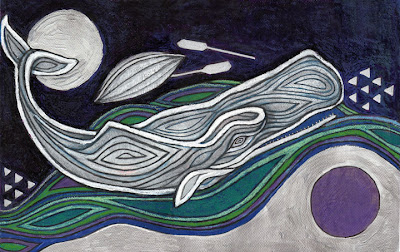 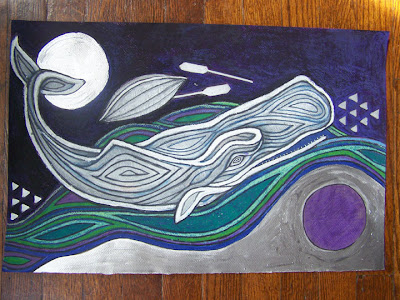 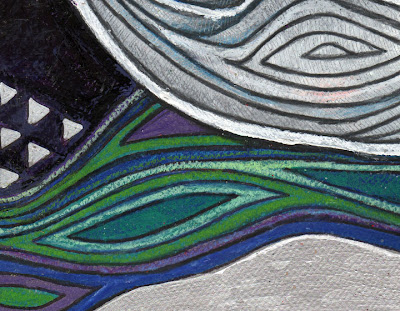 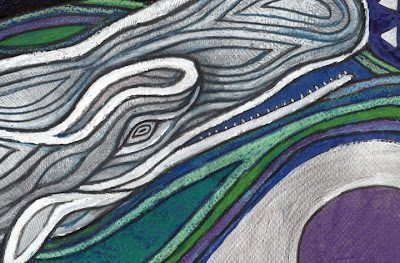