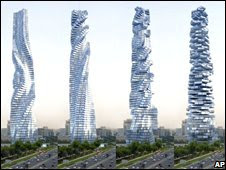 Here is a pretty fascinating design concept, but I suspect it might be a head-spinning place to actually live. The world's first moving skyscraper is going to be built - where else - but in Dubai.

According to the BBC article:

The Dynamic Tower design is made up of 80 pre-fabricated apartments which will spin independently of one another. "It's the first building that rotates, moves, and changes shape," said architect David Fisher, who is Italian, at a news conference in New York. "This building never looks the same, not once in a lifetime," he added.

The 420-metre (1,378-foot) building's apartments would spin a full 360 degrees, at voice command, around a central column by means of 79 giant power-generating wind turbines located between each floor.

The completed skyscraper should be ready by 2010. Check out the full article and video here.
Email Post
Labels: architecture